Osram Opto Semiconductors has introduced the P2W 01 LED, a reliable addition to its Osram Ostar Projection series. This LED contains four chips that can be controlled in two separate groups. This provides an integrated solution that, in the event of emergencies, offers trouble-free operation in safety-related and security-related applications such as control room monitors.

The high-current chips in the Osram Ostar Projection are based on the most advanced thin film and UX:3 chip technologies. They produce high luminance, resulting in extremely bright and vivid images. The LED enables lighting solutions to be more compact than before, as a smaller active surface is required to achieve the same light output. Customers who are currently using the P2W can easily upgrade their design to Osram’s P2W 01 because the size and optical/technical data correspond to those of the P2W version. Connectors and other accessories are readily available.

The LED will be used in particular as a light source for rear projection systems. This involves projecting the image onto a screen with the aid of reflective optics. Systems such as these are often designed without borders. Multiple systems can be arranged seamlessly next to each other, creating a large borderless display with multiple screens on which one image can be shown or a different image can be shown on each screen. These systems are used predominantly in the security sector, where 24-hour operation is needed. Applications include control rooms for subway stations, railroad stations and underground car parks, as well as major events and industrial plant control. 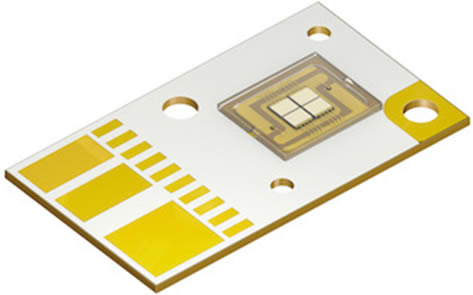 "The redundant systems of the Osram Ostar Projection LED make it suitable for 24/7 applications. If a chip should ever unexpectedly fail, the second system will continue to operate without any problem at all,” said Andrew Lin, Product Marketing Manager, Osram Opto Semiconductors.

Up to now, only the chips in the larger Osram Ostar Projection P3W could be controlled separately. The P2W 01 makes this possible with a compact LED that has two self-contained parallel systems with two chips each. The connection design has also been improved, from 2-pad to 3‑pad, providing three connections instead of two. All four chips occupy one pad, and the other two pads are each reserved for a group of two.

"A new soldering process ensures that the heat produced in the application remains low, enabling the connection between the chip and the package to withstand higher temperature operation,” added Lin.